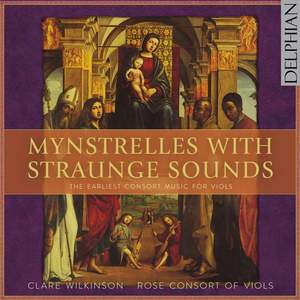 The Earliest Consort Music For Viols

Wilkinson’s androgynous, straight tone chafes vividly against the viols – a smooth gloss on a pitted sound that creates necessary variety and beauty in a disc that might easily have been a historical... — Gramophone Magazine, September 2015 More…

anon.: And I were a maiden

A rapid transformation in musical tastes occurred in the years around 1500, with the relatively widespread distribution of part-music in the new medium of print – it was in this context that the consort of viols emerged. For their third recording on Delphian, the Rose Consort use a set of instruments modelled on those depicted in an Italian altarpiece dating from 1497 in Bologna. Peerless early-music mezzo Clare Wilkinson joins the consort in a sophisticated interweaving of voices that casts revealing light on the earliest music for this innovative ensemble. Rose Consort of Viols’ recent engagements have included performances at the BBC Proms Matinees at Cadogan Hall with vocal ensemble Tenebrae, at the National Gallery in London and for Semana de Musica Religiosa in Cuenca, Spain. The Consort has received awards for its research and performance of newly devised programmes, and has made a number of highly acclaimed recordings for Delphian and other labels, including most recently 'An Emerald in a Work of Gold: Music from the Dow Partbooks' (Delphian DCD34115), a disc of music by Byrd and his contemporaries in collaboration with The Marian Consort, and 'Serenissima' (DCD34149), a programme of music from Renaissance Europe performed on instruments by Richard Jones copied from the earliest surviving viol, a Venetian instrument by Francesco Linarol from c.1540. A second recorded collaboration with The Marian Consort, 'Loquebantur: Music from the Baldwin Partbooks' (DCD34160), will be released 28 September, 2015.

Wilkinson’s androgynous, straight tone chafes vividly against the viols – a smooth gloss on a pitted sound that creates necessary variety and beauty in a disc that might easily have been a historical curiosity.

For the more refined music, both sacred and secular, which forms the bulk of the collection the Rose Consort offer performances as good as you are likely to hear from a viol consort and Clare Wilkinson puts aside her Mummerset opening mode to excellent effect in the vocal items...A first-class album.

The Rose Consort of Viols play diligently, if a little humourlessly, but all ears will be on the glorious singing of mezzo Clare Wilkinson. Her soft voice is totally beguiling in this intimate repertoire: full of elegant contours and no sharp edges, perfect for weaving among the gentle viols.

In this luxuriant survey of the period… the Rose Consort of Viols capture the explorative virtues of the music, as composers wrestled with the idea of extended structures free of textual framework. The players are joined in many of the tracks by mezzo soprano Clare Wilkinson, whose clean, unaffected singing adds the necessary contrast to the consort-only numbers.