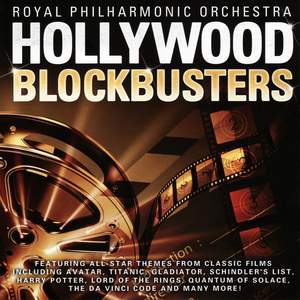 Horner: Avatar: I See You

Barry, J: Out of Africa

Out of Africa: Main Theme

Horner: A Beautiful Mind: A Kaleidoscope of Mathematics (arr. N. Raine for orchestra)

Shore, H: The Lord of the Rings: The Fellowship of the Ring: Main Theme (arr. N. Raine for orchestra)

Hamlisch: The Way We Were: Main Theme (arr. N. Raine for orchestra)

Parton: The Bodyguard: I Will Always Love You (arr. M. Townend for orchestra)

A film music extravaganza for movie fans of all ages. Enjoy over 2 hours of memorable music from all-time favourite films.

During its near-70 year history, the RPO has performed on the soundtracks to many famous films, including iconic 'The Red Shoes' and Academy Award-winning 'A Passage To India', plus more recent releases. The RPO has also recorded 13 discs of movie music for its own record label, of which Hollywood Blockbusters features much of the most popular repertoire.

This 2 CD set is being released to coincide with the RPO’s annual sell-out film music concert at London’s Royal Albert Hall.