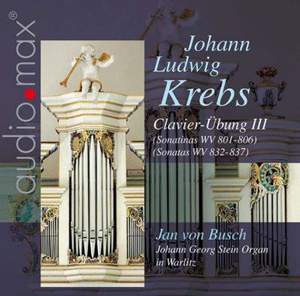 Gems on a Jewel ~ Jan von Busch presents Sonatinas and Sonatas by Johann Ludwig Krebs Johann Ludwig Krebs was one of Johann Sebastian Bach’s favorite pupils; he was on particularly close terms with the famous Thomaskantor and is to be credited with the transmission of Bach’s organ music. In his own organ works Krebs quite audibly followed his great model. His sonatas and sonatinas, now recorded for the first time by Jan von Busch on the historic Warlitz organ, are clearly much more progressive.