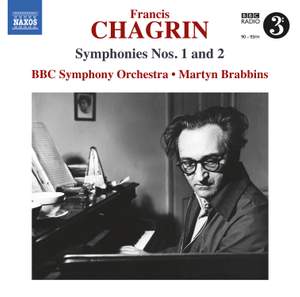 Martyn Brabbins and the BBC Symphony Orchestra remain excellent guides to the score's closely-worked wonders…you can only regret that life didn't allow Chagrin any time for a Symphony No. 3 — BBC Music Magazine, April 2016, 4 out of 5 stars More…

Francis Chagrin described himself as ‘Romanian by birth, British by nationality and cosmopolitan by inclination’. A student of Paul Dukas and Nadia Boulanger, Chagrin wrote prolifically for films but composed for most genres. The two symphonies are among his most important orchestral works. Both are dramatic, even passionate—not least in the beautiful slow movements—and full of contrasts, both within and between movements. Undeservedly neglected, they reveal Chagrin’s mastery of form and colour.

Martyn Brabbins and the BBC Symphony Orchestra remain excellent guides to the score's closely-worked wonders…you can only regret that life didn't allow Chagrin any time for a Symphony No. 3

the First Symphony impresses by dint of its solid craftsmanship, tasteful restraint and enviable sense of purpose…[the Second] proves another sinewy and rewarding utterance, skilfully orchestrated, uncompromisingly defiant in spirit…collectors with a fondness for, say, Alan Rawsthorne [or] Lennox Berkeley…should waste no time in investigating these two compositions

As the BBC Symphony Orchestra’s fiercely engaged performances under Martyn Brabbins show, both symphonies are thoroughly worthwhile…there are some echoes of French music, particularly of Roussel in the First Symphony, but much more of that work sounds close to Walton’s music of the postwar period…together, [these symphonies] define an intriguing creative figure, whose music needs to be explored further.