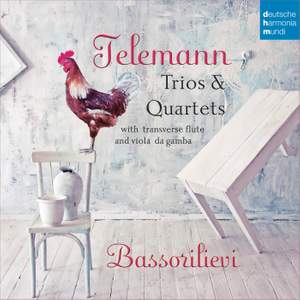 This programme with Trios and Quartets reveals Telemann as an accomplished and fastidious craftsman, with an acute sense of effective colour and an ability to blend stylistically divergent features into a fluent and satisfying whole. The performances by Bassorilievi are characteristically energetic and stylish. Telemann embraced many national styles in his trios and quartets. The result is an amalgamation of German, French and Italian stylistic elements with which he created a kaleidoscope of sounds taking the listener on a musical tour throughout Europe. A major musical figure of the 18th-century, in his time, Telemann was more popular than Bach. This master of instrumental music was open to French and Italian influences and to the new gallant style that flourished in Germany. Telemann wrote music notable for its considerable panache. This is especially true of his chamber music, a selection of which is offered here on this recording featuring the ensemble Bassorilievi. BASSORILIEVI is an early music ensemble, founded by ELISA COZZINI (Flute), FRANCESCO TOMEI (Gamba) and FEDERICA BIANCHI (Harpsichord). Guest musicians often join them, when specific projects require additional instruments. Each member pursues a busy individual career in Baroque consorts and orchestras, both at home and internationally. This is the debut recording by BASSORILIEVI.