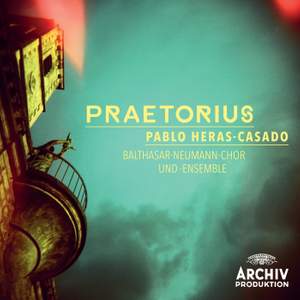 [The Magnificat] gets a sprightly performance, and [Vulnerasti cor meum] is rendered with sensitivity and poise. — BBC Music Magazine, October 2015, 3 out of 5 stars More…

Conductor Pablo Heras-Casado talks to David about his new disc exploring the rarely-heard works of Jakob, Michael and Hieronymus Praetorius.

Relaxing and heavenly music from the early 17th century for choir and small ensemble by Jacob, Hieronymus and Michael Praetorius. The Balthasar-Neumann-Ensemble and Balthasar-Neumann-Chor (founded by Thomas Hengelbrock) is one of the most prestigious and famous early music ensembles. It can definitely be considered as one of the best groups in the world of early music.

Michael Praetorius can be considered as one of the leading German composers of the early 17th century (The familiar harmonization of “Es ist ein Ros entsprungen“ (Lo, How a Rose E'er Blooming) was written by him in 1609).

Pablo Heras-Casado is among the hottest young conductors of our time and leads the world’s best orchestras. He was named Musical America's 2014 Conductor of the Year and since 2010 alone, he has made a first appearance with nearly 40 orchestras, opera companies, and festivals, from the Berlin Philharmonic to the Boston Symphony Orchestra to the Salzburg Festival and more.

[The Magnificat] gets a sprightly performance, and [Vulnerasti cor meum] is rendered with sensitivity and poise.

Recorded in a spacious studio rather than an echoey church, the precisely tuned voices resonate, but the harmonies are clean enough for each unexpected twist and crunch to register beautifully, and the choir revels in the echoey spatial effects of Hieronymus’s Tota Pulchra Es. A full complement of accompanying instruments is used...but their contributions are mostly subtle, enhancing the texture without upstaging the voices.