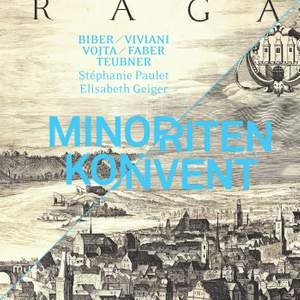 Manuscript XIV 726 from the Convent of the Minorites

Jan Ignác František Vojta: Sonata No. 70 in B Minor

Under the enigmatic title of 'Minoritenkonvent' hides a manuscript which is dated from the end of the 17th century and conserved in the Convent of the Minorites in Vienna. This manuscript comsists of a huge number of Sonatas written for the violin during this baroque period, either by German composers, or by composers influenced by the music and style of the North of the Alps, the most famous of them being HIF Biber.

The Manuscript XIV 726 of the Convent of the Minorites in Vienna has been known to musicologists for many years. It reveals flourishing violin activity from the late 17th century, to the North of the Alps where a school of instrument-making evolved with the local sonata style, independently of what was taking place in Italy. The sonatas performed here are highly advanced as regards violin technique of the time; the works are virtuosic, many passages are written as improvised preludes. Everything is written down, yet in the style of an improvisation. The organ used is the only ‘positive’ (i.e. placed on the floor, unlike organs in lofts) of the organ builder André Silbermann that still exists, restored in 2011 to its original condition and possessing an exceptional sound. After a first disc devoted to Guillemain, MU004, released in 2012, Stéphanie Paulet, first violin of Laurence Equilbey's Insula Orchestra scores a hit with this project that reveals the flourishing violin activity in the late 17th century to the North of the Alps. Accompanied by a ‘positive’ organ of exceptional sound quality, her violin sings, leaps and makes us vibrate through the aural beauty of this disc, enhanced as it is by quite simply magnificent sound engineering.