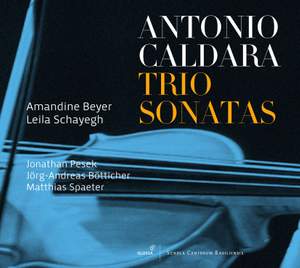 these trio sonatas are full of colour and sonority, even though the scoring is for just two violins and continuo. Corelli is clearly the model...Right at the end comes the gem: a Chiacona where... — The Observer, 7th June 2015, 4 out of 5 stars More…

Two former students of the Schola Cantorum in Basle, both now captivating audiences each with their individual violinistic artistry, Amandine Beyer and Leila Schayegh, join forces for a new SCB recording devoted to the trio sonata music of Antonio Caldara, and issued with Glossa.

Though he is known now (as for much of his life) primarily as a composer of oratorios and operas, the Venetian Caldara made his name penning early examples of the trio sonata form; his Opp. 1 and 2 sets were published in 1693 and 1699 respectively.

Caldara’s Op. 1 Trio Sonatas are characterised by their contrasting use of fast and slow movements, those from the second set by their incorporation of dances. Yet Caldara’s melodic gift – which was to serve him so well in his musical posts in various Italian states, in Barcelona, and as vice-Kapellmeister at the Imperial Court in Vienna – is already evident in Beyer and Schayegh’s selection from his instrumental publications; the composer was also already noted as a virtuoso of the cello – and he also played the violin and keyboard, and the awareness of all these instruments is greatly evident in these trio sonatas.

The continuo team here is made up of Jonathan Pesek, cello, Jörg-Andreas Bötticher, harpsichord and organ, and Matthias Spaeter, liuto attiorbato. Beyer and Schayegh both were taught at the SCB by Chiara Banchini and are continuing their connection with the school as teaching successors to Banchini.

these trio sonatas are full of colour and sonority, even though the scoring is for just two violins and continuo. Corelli is clearly the model...Right at the end comes the gem: a Chiacona where Caldara throws caution to the winds and these lively players sound as if they are improvising.

Beyer and Schayegh are well matched partners … All performers benefit from a well-balanced, vivid yet spacious and full recording.