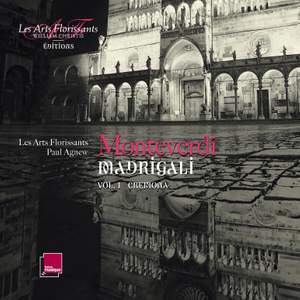 There are some delightfully sparkling and engaging displays here...recordings of Monteverdi's very early madrigals are rare and this surpasses some...if not all. — BBC Music Magazine, October 2015, 3 out of 5 stars More…

This disc is the second of three volumes to appear offering an anthology of the eight Books of madrigals by Monteverdi, interpreted by Les Arts Florissants directed by Paul Agnew.

Each volume will be associated with one of the cities that marked out the composer’s career: this opus dedicated to Cremona (extracts of Books I, II, III) takes part after the one dedicated to Mantova (Books IV, V, VI already released) and before the Venice volume (to be released in February 2016 – Books VII and VIII). Cremona is the city where one of the greatest geniuses in music grew up: Monteverdi was born in 1567 and spent his first 20 years in this small Lombard city on the Po plain, where his musical vocation was born.

Les Arts Florissants are the best ambassadors, who have since 2011, performed this repertoire throughout Europe; a vast undertaking..

There are some delightfully sparkling and engaging displays here...recordings of Monteverdi's very early madrigals are rare and this surpasses some...if not all.

If a keen sense of the interpretative moment is the hallmark of ensemble performance at its best, then this new Monteverdi instalment from Les Arts Florissants deserves to be held up as such...One is torn between regret that there is to be only one further volume, and anticipation at what it might bring.

Cremona dips into Books 1-3 to show a ballsy young composer flexing his muscles, breathlessly setting love poems and brimming with clever tricks. Les Arts capture all the exuberant invention. Their delivery is fresh and colloquial, like animated conversation between friends. The vocal blend isn’t smooth – the character of each singer shines through, and the result is all the more colourful for it.