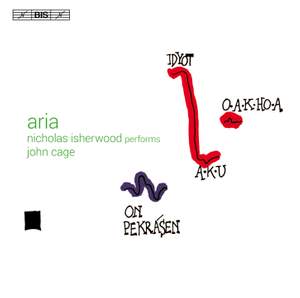 [Isherwood's] new disc is an eloquent and persuasive contribution to the Cageian cause precisely because he approaches the music from an alternative vantage point, and Cage's material proves... — Gramophone Magazine, August 2015 More…

Cage: A Chant with Claps

Nicholas Isherwood made his début as Lucifer in Stockhausen’s Donnerstag aus Licht at Covent Garden, at the age of 25, and has since collaborated closely with composers such as George Crumb, Hans Werner Henze, György Kurtág and Iannis Xenakis. His relationship with John Cage soon developed into what he in his liner notes to the disc calls ‘a love affair’. The composer Sylvano Bussotti has remarked that ‘since the passing of Cathy Berberian, Nicholas Isherwood is the singer who best understands the spirit of the music of John Cage’. On ARIA, Isherwood presents most of Cage’s music for solo voice that is not included in the composer’s Song Books, and most pieces are here recorded for the first time by a male singer. The programme covers 43 years, from A Chant with Claps from the early 1940s to Ryoanji and Sonnekus2 of the 1980s, and includes the celebrated Aria, here performed with a new multi-channel tape realization of Cage’s Fontana Mix, by the Italian composer Gianluca Verlingieri. In three of the songs (A Flower, The Wonderful Widow of Eighteen Springs and Nowth Upon Nacht) Isherwood accompanies himself on a closed piano, tapping on the lid in the first two, and slamming it down on the keys in the third. Ryoanji – named after the famous rock garden in Kyoto and described by Cage as ‘a garden of sounds’ – is a central work in Cage’s production, and exists in several versions. Here it is heard for voice and percussion, performed by Isherwood with the use of a crystal wine glass.

[Isherwood's] new disc is an eloquent and persuasive contribution to the Cageian cause precisely because he approaches the music from an alternative vantage point, and Cage's material proves itself robust enough to cope.

Isherwood says it took him a long time to appreciate the music of John Cage, but you’d never guess...this collection is affectionate and forthright, meticulous when it matters and generally great fun. Isherwood’s voice is rich, clear and lyrical; the same delivery would suit a disc of American folk ballads.