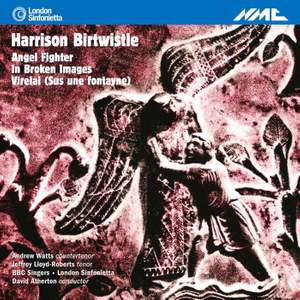 Birtwistle unleashes all his powers as a stage composer onto Stephen Plaice's text, using the whole building to create a thrilling dramatisation of the Bible story…pungent pizzicato rhythms,... — BBC Music Magazine, September 2015 More…

Harrison Birtwistle is internationally regarded as one of the most striking and individual composers today. His unique soundworld runs the full gamut from large-scale operatic and orchestral canvases, rich in mythical and primitivist power, to intimate chamber works, contemplative in their lyricism.

One of Birtwistle's most recent works The Cure – a co-commission between The Royal Opera House, Aldeburgh Music and London Sinfonietta – has its World Premiere 12-15 June at Britten Studio, Snape Maltings, Aldeburgh, and London Premiere at Linbury Studio Theatre, London 18–27 June 2015.

Described by The Guardian as 'hauntingly powerful', Birtwistle's cantata Angel Fighter vividly explores the Biblical story of the struggle between man and divine being from the Book of Genesis. Predictably, for a composer with a long-standing fascination in myth, drama and ritual, it's the physical fight between Jacob and the Angel more than religious signifi cance, that interests Birtwistle: the tension, twists of pulse, sharp accents and jeering chants from the chorus make it feel more like a wrestling match than a life-or-death struggle. Quartertones and string harmonics enhance the otherworldly descent of the Angel from Heaven and librettist Stephen Plaice makes clever use of Enochian, an angelic language 'discovered' by the 16th century alchemist and adviser to Queen Elizabeth I, John Dee.

In Broken Images, inspired by Gabrieli's multi-choir canzonas, splits the ensemble into four groups (woodwind, brass, strings and percussion) and takes its title from the Robert Graves poem. Birtwistle continues to draw influence from the past in Virelai (Sus une fontayne), a rhythmically intricate realisation of a piece by Johannes Ciconia, who flourished in the late Middle Ages, around the time that Chaucer was writing his Canterbury Tales.

Birtwistle unleashes all his powers as a stage composer onto Stephen Plaice's text, using the whole building to create a thrilling dramatisation of the Bible story…pungent pizzicato rhythms, visceral trumpets, groaning lower brass and winds shrilling overhead drive the three-way confrontation…the London Sinfonietta, under David Atherton, lend it both soul and a zinging edge.

anyone in 2015 disposed to expect ageing dinosaurs going through the motions should be struck by the energy and sharpness of response in these recordings...Angel Fighter owes as much to terse commentaries from choir and instruments as to extended dialogues between admirable singers, and Atherton couples scrupulous attention to detail with exemplary alertness to the steadily unfolding shape of the whole.

[Angel Fighter] would evoke Bach cantatas if Birtwistle’s gestic pungency did not sweep all before...In Broken Images (2011) — an intriguing meditation on the eponymous Graves poem — might evoke Gabrieli but for the same proviso. The brief Virelai (Sus une fontayne) brilliantly transforms a late-medieval original.

Angel Fighter, composed for the Thomaskirche in Leipzig, is a spare and strikingly original piece of dramatic storytelling. It presents the Old Testament tale of Jacob wrestling an angel as a ritualised game between the tenor Jacob (Jeffrey Lloyd-Roberts) and the counter-tenor Angel (Andrew Watts) and climaxes in one of the great dramatic moments in Birtwistle’s concert music.