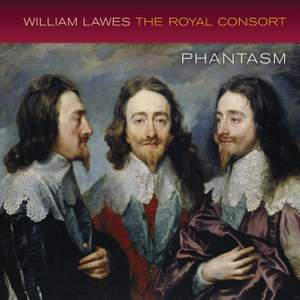 The musicians respond to Lawes's complex and variegated emotions with playing by turns buoyant and vigorous, graceful and serene. They delight, too, in his quirky wit...[in Consorts to the Organ]... — BBC Music Magazine, August 2015, 5 out of 5 stars More…

Described as ‘one of the greatest collections of ensemble dance music ever composed’, Lawes’ Royal Consort is full of astounding moments of striking musical invention.

This sublime collection boasts a range and depth of expression, which excites both mind and body through Lawes’ startlingly individual pieces.

This recording is the first complete recording of Lawes’ version of the Royal Consorts for four viols and theorbo.

Phantasm, under the direction of Laurence Dreyfus, presents a passionate and insightful look into this adventurous music.

The result is a rich and warm recording of technical brilliance that takes the listener deep into the harmonically rich world of Lawes.

Phantasm’s previous recording of Lawes, Consorts to the Organ, was both a Gramophone Awards finalist and a BBC Music Magazine Award nominee in 2013.

Phantasm has been widely acclaimed for its previous recordings with Linn: its 2011 recording of William Byrd was named ‘Disc of the Month' by BBC Music and its 2009 Linn debut of music by John Ward was described as ‘stunning' by Gramophone.

Critics have described the ensemble and its recordings as ‘intoxicating', ‘revelatory', ‘electrifying' and ‘interpretations pervaded by a truly burning spirit'.

The award-winning ensemble has been applauded across the globe for its moving performances and is recognised as the most exciting viol consort active on the world scene today.

Phantasm’s international members (from Britain, Finland and the US) are based in Oxford where they are Consort-in-Residence and regularly collaborate with Magdalen College Choir under its director, Daniel Hyde.

The musicians respond to Lawes's complex and variegated emotions with playing by turns buoyant and vigorous, graceful and serene. They delight, too, in his quirky wit...[in Consorts to the Organ] the players discourse with subtle rhetoric and high seriousness, underscoring the music's pervasive melancholy.

The viol music of William Lawes is like nothing else: weird phrase lengths, irreverent weightings and rogue, sumptuous harmonies that will make you gasp out loud every time...the Phantasm players really run with it: twist after turn of lapping, pliant lines and spirited counterpoint, all done with a real sense of swing. The ensemble sound is luxuriantly rich, powered by Elizabeth Kenny’s feisty theorbo strumming.