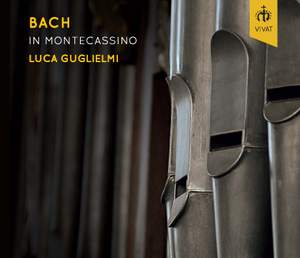 Gugliemi's disc gives a lively snapshot of what at least might have been heard; and, thanks to an instrument built in the year before Bach's death…how it must have sounded too…thoughtfully programmed,... — BBC Music Magazine, September 2015 More…

In a church in a quiet northern Italian town, Alice Castello, survives a hidden jewel: an organ dating from 1749, perfect for Bach’s organ music.

The latest release on the acclaimed VIVAT label, performed by renowned Italian organist Luca Guglielmi, presents a remarkable programme of some of Bach’s finest keyboard works, performed on the organ in the Chiesa di San Nicolao, Alice Castello.

Guglielmi’s striking Bach programme is compiled from works collected by two eighteenth century scholars, Padre Martini and Friedrich Wilhelm Rust, that would surely have been heard in the famous Abbey of Montecassino, a magnet for musical travellers on ‘The Grand Tour’. Martini and Rust played a major role in the creation of the first collected edition of Bach’s works.

The vivid sound of the unique surviving eighteenth century Italian organ in San Nicolao, Alice Castello, and the equally stunning acoustic of the church, is brilliantly captured in this new VIVAT release.

Gugliemi's disc gives a lively snapshot of what at least might have been heard; and, thanks to an instrument built in the year before Bach's death…how it must have sounded too…thoughtfully programmed, Gugliemi's Italian perspective intrigues.

A true recognition of Bach’s genius took some time, but these works were circulating shortly after his death and are here wonderfully played on an organ of the era.

This is no ordinary greatest hits disc of Bach’s organ music. The organ used here is a fascinatingly sweet-toned baroque instrument by Michele Ramasco of 1749 (added to by Bruna in 1802 and in remarkable condition).

Acoustically and tonally the San Nicolao organ possesses a lovely bloom and a dynamic spectrum that suits this music ideally. Moreover, Guglielmi is a dexterous and sensitive exponent, as compelling in the quieter, more reflective realms of the repertoire as he is in those of dramatic flourish.