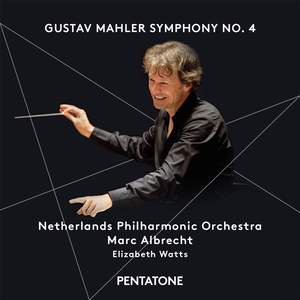 Successively excited, rueful and at peace, [Watts] leaves extremes of colour to the orchestration around her…I especially enjoy Albrecht and the orchestra letting the sunshine into the Scherzo,... — Gramophone Magazine, June 2015 More…

Mahler’s Symphony No. 4 portrays another side of the composer, different to the one hitherto seen by the general public. No major battles are fought in this symphony; rather, it is a portrayal of a childlike vision of life and a better world in the Hereafter. Mahler’s Dutch friend and colleague, Alphons Diepenbrock, may well have provided the most fitting description of the nature of this symphony and its position within Mahler’s oeuvre: “[...] in his Symphony No. 4, he exclusively praises the sensations of the soul, severed from all earthly ties, from various angles ⎯either as childish yet unearthly merriment, or as the highest ecstasy attained by mystics in bygone years during the contemplation of the divine. However, one should not search for irony here. The work is like a beautiful dream, an indispensable link in the series of Mahler’s nine symphonies that speak sufficiently of harsh reality, and that, according to some, will one day be considered the monumental musical oeuvre of the present day.”

The Netherlands Philharmonic Orchestra lives up to its reputation for its brilliant Mahler performances and surpasses all expectations under the baton of conductor Marc Albrecht. And Elizabeth Watts’ performance in the final movement is surely one not to be missed. The chemistry between Watts and the orchestra is utterly pervasive. With a voice described by International Record Review as “one of the most beautiful Britain has produced in a generation”, Watts sweeps the listener off their feet with this sunny, accessible symphony from Mahler. The perfect combination of immaculate performance with impeccable PENTATONE sound quality can only result in a magical musical experience.

Successively excited, rueful and at peace, [Watts] leaves extremes of colour to the orchestration around her…I especially enjoy Albrecht and the orchestra letting the sunshine into the Scherzo, and their negotiation of the first movement is classical in form and conception…in its self-effacing way, the performance is true to the symphony's deceptive charm