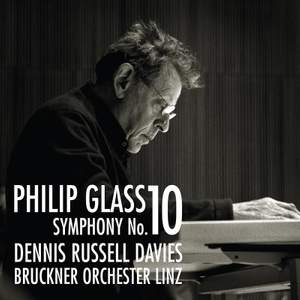 Its extrovert origins as latter-day fireworks music remain clear, though, as Glass’s orchestration, with its brassy edge and martial percussion – lots of snare drum – underlines in Davies’s performance. — The Guardian, 20th August 2015, 3 out of 5 stars More…

Orange Mountain Music presents the world premiere recording of Philip Glass’s Symphony No.10 performed by the Bruckner Orchester Linz under the direction of Dennis Russell Davies.

Following the grand sweep and large canvas of Glass’s Ninth Symphony, his Tenth Symphony is described by the composer as the “Not-Nine Symphony.” Set in five shorter movements, this shorter work is a compact tour-de-force – originally inspired by a public fireworks project that premiered in Spain in 2007. Glass orchestrated the work in 2012 and it premiered in 2012 in France under Davies as Symphony No.10.

“Concert Overture (2012)” was composed as a celebratory piece to commemorate the bicentennial of the War of 1812 and had a simultaneous premiere in Toronto with the Toronto Symphony conducted by Peter Oundjian and in the composer’s hometown of Baltimore with the Baltimore Symphony and Marin Alsop. Juxtaposed with Tchaikovsky’s “1812 Overture” which celebrated the end of the war, Glass’s “2012 Overture” became “a celebration of a celebration.” The rousing overture is featured here in its world premiere recording.

Its extrovert origins as latter-day fireworks music remain clear, though, as Glass’s orchestration, with its brassy edge and martial percussion – lots of snare drum – underlines in Davies’s performance.