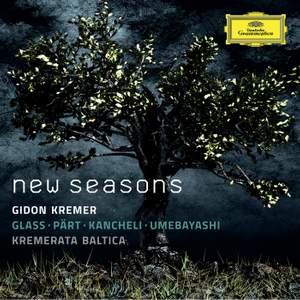 The four movements [of Glass's American Four Seasons] are interspersed with a prelude and three short 'songs' for solo violin, which bring further textural variety to the party, thrown with absolute... — BBC Music Magazine, November 2015 More…

Gidon Kremer returns to the Yellow label after more than a decade with the brand new reference recording of Philip Glass’ Second Violin Concerto – “The American Seasons”, hs first solo concerto album in many years.The first Glass Violin Concerto, performed by Kremer and released by DG in 1993, has achieved cult status and shipped close to 90k units (in Germany alone over 25k copies) – and has become a staple of DG’s contemporary music catalogue.

Now, this extraordinary follow-up Concerto is at the heart of the repertoire of the Kremerata Baltica. Performed for the first time in San José, Costa Rica with Gidon Kremer as soloist in August 2013, it will be toured later in the year - info to follow shortly.

The album is completed by works of Arvo Pärt and Giya Kancheli – two composers both closely associated with Gidon Kremer, and who are both set to celebrate milestone 80th birthdays this year. Gidon has also added the short piece by the well-known Japanese film composer Shigeru Umebayashi as a tribute to his Japanese friends.

Four highly regarded visual artists and film maker have created four different films for each of the American Seasons that are projected to screens during concert performances.

The four movements [of Glass's American Four Seasons] are interspersed with a prelude and three short 'songs' for solo violin, which bring further textural variety to the party, thrown with absolute conviction by Gidon Kremer…Kremerata Baltica and soloists embrace the extremes of [Giya Kancheli's] writing - from its eastern-sounding melismata for cello to brooding climaxes to sentimental strings - with compelling results: it has some astonishment moments.

Kremer is one of those rare musicians capable of illuminating a new work in such a way as to reveal its true greatness…[his] performances, as ever, bring the music to full bloom: truly a 'musician for all seasons'.

When the violinist Robert McDuffie asked Philip Glass to compose him a companion concerto to Vivaldi’s Four Seasons, Glass responded with a work with no clues among its four movements as to where winter, spring, summer or autumn can be found – listeners are left to decide for themselves