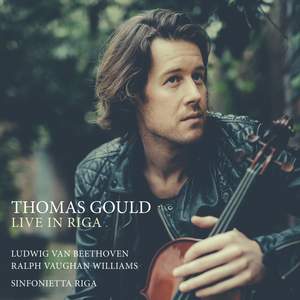 Here [Gould] is found live in Riga, playing the Beethoven concerto with a pure, shining, even spiritual lyricism, accompanied by the lean forces of the Sinfonietta Riga...The Lark Ascending makes... — Financial Times, 2nd May 2015, 4 out of 5 stars More…

‘Live in Riga’ is the new recording from the celebrated 31 year-old British violinist Thomas Gould and the first of a three-album deal with forward-thinking British jazz and classical record label Edition Classics. Recorded live in concert, with Sinfonietta Riga, on April 11th 2014, at the Great Guild Hall in Riga, Latvia, it confirms Gould’s enormous potential as one of the most inventive and colourful instrumentalists of his generation. His most recent release on harmonia mundi, of the 'Goldberg Variations' with the Britten Sinfonia, is Gramophone Editor's Choice in the April issue and, at the time of writing, this featured in the Specialist Classical Chart.

Over the last decade he has been in demand as a soloist and as leader/director with major orchestras worldwide, including the CBSO, Hallé Orchestra, Britten Sinfonia, Aurora Orchestra, Mahler Chamber Orchestra and the Australian Chamber Orchestra’s ACO2.

Sinfonietta Riga is an orchestra with a story to tell. Formed in 2006, their vision is as bold as Gould’s. Equally happy to play in concert dress or T-shirts they are intent on building new audiences whilst reaching for the highest artistic standards. Their collaboration is a perfect match and this live concert recording bears witness to this special musical symbiosis.

To release an album featuring Beethoven’s Violin Concerto and Vaughan Williams’s 'The Lark Ascending' is a bold decision: as two cornerstones of the violin repertoire, there are plenty of performances to compare. However, Gould’s versions demonstrate a brilliance of tone and colour that demands attention; his flexibility and breadth of musical interests is fully evident. Gould’s playing has the clarity you would expect from any major performer but radiates a freedom in its expression, as though improvised, with an immediate elegance and poise.

Here [Gould] is found live in Riga, playing the Beethoven concerto with a pure, shining, even spiritual lyricism, accompanied by the lean forces of the Sinfonietta Riga...The Lark Ascending makes a suitably soaring bonus.

[Gould] masterminds a delectably articulate and pliant account of the Beethoven Violin Concerto with his bright-eyed and eagerly responsive Latvian colleagues. There's a security, familiarity and silky warmth about Gould's tasteful contribution that many will find gratifying...[in The Lark] Gould soars aloft with effortless grace, tenderness and fragrant poetry.

It is among the most beautiful [recordings of the Beethoven] I have ever heard. Under Gould’s direction of the Riga musicians, the march of the music is both grand and delicate, and his playing is a marvel. A rapt Lark Ascending completes an exceptional disc.

In this live recording of Beethoven’s Violin Concerto, with the vibrant state chamber orchestra of Latvia, Sinfonietta Riga, his playing is poetic, buoyant and secure, the slow movement especially persuasive.

Gould's playing is so lucid and polished that you wouldn't believe this is a live recording.

There is a natural sweetness and polish to Gould’s timbre, but it has ripeness, clarity and purity as well. It is malleable to the changing demands of the music, broad of phrasing, buoyant in articulation, raptly intense in the slow movement...an absolute winner of a disc.

Gould has taken an unforced, unhurried and completely non-rhetorical view of the piece. In his hands the concerto is spacious and supple. It retains its nobility, meat and muscle, but is shaped by Gould’s subtle and seductively expressive lyricism; and for him the concerto sings. There’s also a marvellous discretion to the Riga Sinfonietta’s playing. The resultant intimacy in the performance is a wonder.