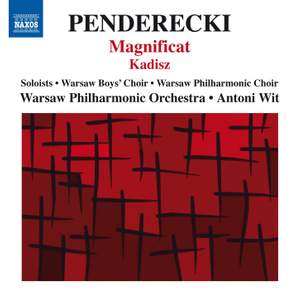 When the Magnificat finally explodes into celebration, it does so in spectacularly emphatic fashion, and the ever-imperturbable Antoni Wit is in his element throughout, sustaining the tension... — Gramophone Magazine, July 2015 More…

The two works on this recording are separated by 35 years, during which time Penderecki made a decisive break with the post-war European avant-garde. In the Magnificat, chilling instrumental clusters, spectral sounds and impassioned rhetoric unite with tonality and counterpoint to deliver a work of monumental emotional power. Written to mark the 65th anniversary of the end of the Jewish ghetto in Łódź, Kadisz is among the most distinctive of Penderecki’s later choral works in the stark contrasts between drama and sombre reflection of its individual sections.

Our magnificent catalogue of new recordings by Krzysztof Penderecki conducted by Antoni Wit guarantees massive interest in every new release, his versions of the symphonies (box set 8505231) considered “the standard by which all others will be judged” by ClassicsToday. com. We have had success programming Penderecki’s earlier avantgarde ‘classics’ with his more romantic later works, such as the Credo and Cantata (8572032) given ‘top recommendation’ status by ClassicsToday.com. The central placement of the tremendous Magnificat makes it an essential part of Penderecki’s oeuvre, our potent new performance easily able to replace the only complete alternative on CD, the EMI analogue recording by Polish Radio from 1972.

When the Magnificat finally explodes into celebration, it does so in spectacularly emphatic fashion, and the ever-imperturbable Antoni Wit is in his element throughout, sustaining the tension in the quieter early stages and delivering maximum impact later on.

His Magnificat dates from 1974, a crossroads between early-period astringency and the effusive neo-Romanticism he favoured from that point. It’s a peculiar and gripping mix: clammy tone clusters and slithering violins cut to resounding diatonic chords and bellowing bass solos – a massive sound here from Wojtek Gierlach.