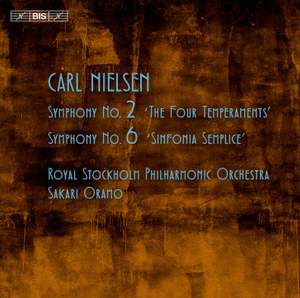 Sakari Oramo's cycle of Nielsen symphonies roars to its conclusion with an account of the Second, The Four Temperaments, irresistibly driven by a fifth - Oramo himself. The choleric hero positively... — Gramophone Magazine, June 2015 More…

Sakari Oramo's cycle of Nielsen symphonies roars to its conclusion with an account of the Second, The Four Temperaments, irresistibly driven by a fifth - Oramo himself. The choleric hero positively steams into our midst - a Berliozian pirate whose ferocious energy is tamed only by the impassioned lyricism of his more romantic inclinations…a terrific performance of a marvellous symphony, with the delicious easy-going undulations of the phlegmatic fellow really singing here and the melancholic reaches of the slow movement achieving an almost Brucknerian grandiosity…Nielsen's last symphony - anything but 'semplice' - is also finely tuned and disturbingly precise

That the music ebbs and flows so naturally here and in the restless third movement is testimony to Oramo’s sure grasp of the symphony’s architecture, both internal and external. As in his accounts of the First and Third he builds truly commanding climaxes; indeed, there’s something of Sibelius’s imposing topography at times…there are many fine versions of the Sinfonia Semplice in the catalogue, but in the face of Oramo’s overwhelming account there’s little point in trotting them out for comparison. To put it bluntly, this the most penetrating, the most complete, account of Nielsen’s last symphony that I have ever encountered…a feisty, unfettered Second and a benchmark Sixth; a triumph for all concerned.

Oramo is totally in control, letting the panic of the first movement of the sixth take hold with alarming speed but also giving the orchestra space to breathe, as in the broad first movement of “The Four Temperaments”, allowing its rich, full-bodied sound to overwhelm us.