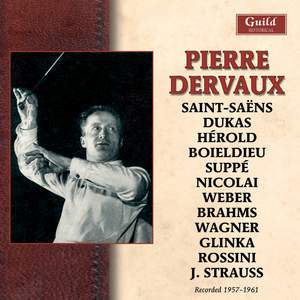 Glinka: A Life for the Tsar: Overture

This CD represents the second remarkable collection of orchestral works recorded under the baton of the French conductor Pierre Dervaux, who was chief conductor of the Paris Opera-Comique and Paris Opera for many years. The repertoire is similar to that on the first CD, being drawn from French, Italian, Russian and German composers from the 19th and early 20th-century - repertoire in which Dervaux was most noted. The original recordings from the late 1950s and early 1960s have been excellently remastered for this release.