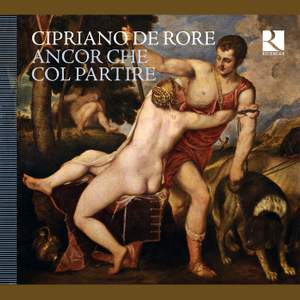 RICERCAR now celebrates its 35th anniversary with a homage to the greatest Flemish composer of the Renaissance. The works of Cipriano de Rore (1515/16 – 1565) remained extremely popular until well after his death. Several of his madrigals later appeared in dozens of ornamented versions and continued to do so until the beginning of the 17th century; this was an extraordinary success for the time.

Ricercar’s leading ensembles of singers and instrumentalists have each made their own original contribution to this recording, providing a complete overview of de Rore’s sacred and secular works. The madrigal Ancor che col partire binds the entire recording together, firstly through the original setting with its erotically charged text and secondly through many instrumental versions that were soon made from it.

In this, our thirty-fifth anniversary year, as we continue to hear about the supposedly inevitable decline of recordings as we know it, this project alone dares to believe that recording is not dead; it is still able to provide a medium for the unusual works that have created its specific identity and educative values, for such works promote both curiosity and the creation of a musical consciousness.

Ricercar’s philosophy and artistic policies continue unchanged; these bear their fruits in its recordings, wonderfully illuminated pages of a vast History of Early Music.