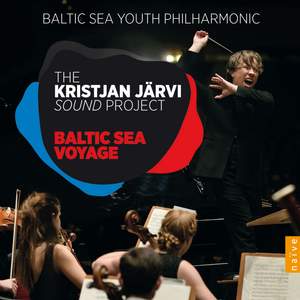 Baltic Sea Voyage is the next instalment in the Kristjan Järvi Sound Project recording series on Naïve Classique. Conceived by Estonian-American Kristjan Järvi and performed by the Baltic Sea Youth Philharmonic (BYP) – of which Järvi is Founding Conductor and Music Director since 2008 – the album celebrates the rich musical landscape of the Baltic Sea region. Järvi comments: “Featuring music from each country bordering the Baltic Sea, listeners can journey from the deep spirituality of Grieg, Sibelius and Pärt and the Nordic mythology of Wagner's Ring, to the folkloric drive of Stravinsky and Kilar, and finally to the pop culture-inspired works of living composers Kalninš and Gelgotas.” Baltic Sea Voyage is the orchestra’s first official album release.