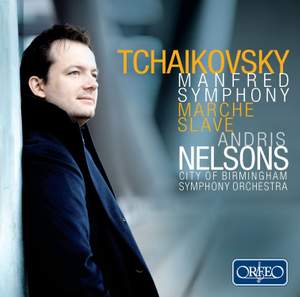 Every detail of Tchaikovsky's intricate and inventive score is captured in this live recording made in Symphony Hall's superb acoustic, with the CBSO players on top of their game. This is, more... — BBC Music Magazine, June 2015, 5 out of 5 stars More…

The 'Manfred' Symphony in B minor, composed between Tchaikovsky's Fourth and Fifth Symphonies, has all too often been overlooked. The latter two symphonies, and the Sixth, have already been released in award-winning recordings from the CBSO under Music Director Andris Nelsons. 'Manfred', after Lord Byron’s dramatic poem of the same name, now enriches this Tchaikovsky cycle through a number of remarkable facets. As suggested by the critic Vladimir Stasov, Tchaikovsky's programmatic late-romantic, agitated series of orchestral scenes depicts Manfred's lonely mountain peregrinations, complete with magical apparitions, an idyllic submersion in nature plus a bacchanal from the nether world. The listener is gripped by the enormous strength of the CBSO string section while the woodwind and brass sections almost steal the show, particularly in the vision of the Alpine fairy and the tempestuous sweep of the bacchanal. Tchaikovsky’s much shorter 'Marche Slave' includes not only musical references to Serbian folk songs but also the Russian National Anthem, 'God Save the Tsar', which caused considerable problems for Russian censors during much of the 20th century. Whether on the concert or operatic podium, conductor Andris Nelsons remains a master when it comes to the heightening of dramatic intensity. Here, with the CBSO once again on superb form, this march assumes a timeless historic stature.

Every detail of Tchaikovsky's intricate and inventive score is captured in this live recording made in Symphony Hall's superb acoustic, with the CBSO players on top of their game. This is, more importantly, a fine performance which encompasses the work's Wagnerian-style doom of the opening, realises the tenderness of the string theme portraying [Astarte]...and does full justice to the initially serene third movement pastoral...Superb.

This new concert recording...manages to make sense of Manfred’s last moments and Tchaikovsky’s finale…a colourful, dramatically impassioned account from the City of Birmingham Symphony Orchestra that makes more sense than most, and the sound of the organ towards the end is a spectacular success. This is a Manfred to which I’ll be happy to return, and that doesn’t happen all that often.

such is [Nelsons's] no-holds-barred conviction, sparky temperament and exhilirating mastery of line and texture that the 58 minutes fairly fly by…fingers crossed for the first three Tchaikovsky symphonies from these same artists!

This is an excellent disc, which shows off the Nelsons/CBSO partnership to admirable effect. There’s plenty of adrenalin in the performances and the very good recorded sound conveys both the power and the subtlety of the orchestra’s playing.