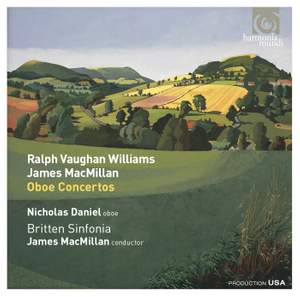 [Daniel] tends to let the tempo slacken when the harmonic pulse slows down [on the Vaughan Williams]...it's hard to complain when that leaves more space for his consistently golden tone...MacMillan... — BBC Music Magazine, August 2015, 5 out of 5 stars More…

Britten: Suite on English Folk Tunes 'A Time there was', Op. 90

I. Cakes and Ale

Two major British oboe concertos featuring soloist Nicholas Daniel with the Britten Sinfonia. Composer James MacMillan conducts the world premiere recording of his own Concerto (dedicated to Nicholas Daniel), as well as his 2012 composition 'One' and the Britten 'Suite on English Folk Tunes: A Time There Was'. The oboist himself directs the Ralph Vaughan Williams concerto, the work with which he won the BBC Young Musician of the Year Competition at the age of 18.

[Daniel] tends to let the tempo slacken when the harmonic pulse slows down [on the Vaughan Williams]...it's hard to complain when that leaves more space for his consistently golden tone...MacMillan also conducts his One, a luminously scored monody.

Oboists may feel ruefully that musical history owes them a showpiece. They have one now: MacMillan’s Oboe Concerto turns the soloist into a nimble-footed musical athlete, a star opera singer, a dazzling Highland dancer, all in the space of three varied movements. Nicholas Daniel makes the most of its virtuoso opportunities, raising the elegiac slow movement to intense heights.

Not only so his [Nick Daniels'] flawless discipline, liquid tone, exquisite chiaroscuro and seemingly superhuman breath control crush the ear, but he also encourages his colleagues to give their polished and raptly committed best ... Excellent sound and truthful balance throughout: this anthology merits a strong recommendation.

A fine showcase for Daniel’s mellifluous playing, the disc is still more than that, ending with a lovely account of Britten’s Suite on English Folk Tunes, and teasing one with a magical, five-minute piece by MacMillan...It is simply (complexly!) a monody passed round the players, glistening as it goes.

This is a bravura display by Daniel, with lightly assured playing from the always-rewarding Britten Sinfonia.

On this disc of delightfully summery music, the emphasis is initially on the pastoral: the airborne lyricism of Vaughan Williams’ Oboe Concerto, its liquid lyricism shaped with velvet perfection by soloist Nicholas Daniel and the Britten Sinfonia … MacMillan’s own Oboe Concerto introduces a feistier mood, its nimble virtuosity playfully executed by the same soloist.

He is arguably Britain’s most virtuosic and adventurous instrumentalist and as mesmerising a talent now, at 53, as he was when he won the BBC Young Musician of the Year competition 35 years ago...The oboe writing [in the Macmillan] is insanely demanding throughout; Daniel is stunning.