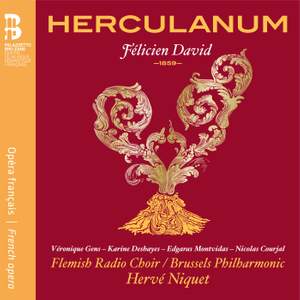 we would listen in vain for anything approaching Berlioz's or Verdi's individuality, but the music is competently written and the soloists, especially Nicolas Coujal doubling as two baddie baritones,... — BBC Music Magazine, December 2015, 4 out of 5 stars More…

Félicien David was already famous through his ‘ode-symphonie’ 'Le Désert' (1844) when his opera Herculanum was first staged at the Paris Opéra in 1859. This ambitious work, later to gain him entrance to the Opéra-Comique and the Institut de France, also played a part in earning him the Légion d’Honneur.

Leaving behind the Middle Eastern inflections of his earlier scores, Herculanum is a remarkably strong composition (vast, intensely dramatic scenes), impressive in the diversity of its style (including Verdian influences) and its vocal variety (including the rare coloratura contralto voice often used by Rossini).

There is also a fantastic vein, as made popular by Boieldieu (La Dame blanche, 1825) and Meyerbeer (Robert le Diable, 1831), but the supernatural is used here to serve an openly stated mysticism: the eruption of Vesuvius brings a spectacular, cataclysmic ending, signifying the decadence of the ancient world and the triumph of Christianity.

we would listen in vain for anything approaching Berlioz's or Verdi's individuality, but the music is competently written and the soloists, especially Nicolas Coujal doubling as two baddie baritones, do a splendid job of bringing out the dramatic interplay between them

anyone interested in this period of operatic history will find the release fascinating. There's much to enjoy, too, from the singers, who by and large make as eloquent a case for the piece as one could reasonably imagine. Véronique Gens is in fine, classy form as Lilia, and is well matched by Edgaras Montvidas as Helios. Karine Deshayes is terrific as Olympia, too.

Though the cast is a small one (just six principals, with Nicanor and Satan performed by the same singer), much of Herculanum is conceived and executed in the grand style, and capably so. The opening is dramatic, the writing invariably skilful, and there are some distinctive oriental touches. It’s also well performed here, despite an occasional untidy orchestral moment under the baton of Hervé Niquet. The Flemish chorus makes an impact. Véronique Gens contributes a powerful Lilia, with Karine Deshayes a spirited Olympia, Edgaras Montvidas dramatically engaged (if a touch throaty) as Hélios, Nicolas Courjal noisily wicked as both Nicanor and Satan, and Julien Véronèse a menacing presence as the Christian prophet Magnus.