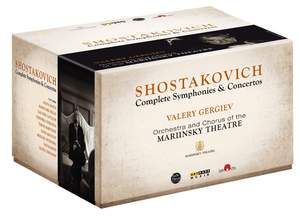 Orchestra and Chorus of the Mariinsky Theatre,...

Most successful are young violinist Alena Baeva, who gives a sensitive and appropriately fiery performance of Violin Concerto…all the symphonies are given excellent, sometimes outstanding performances,... — BBC Music Magazine, December 2015, 4 out of 5 stars More…

Nobody is better suited to undertake such a challenge than Valery Gergiev and his Mariinsky Orchestra. Over a period of a year all 15 Symphonies and 6 Concertos have been recorded at Salle Pleyel in Paris. What an adventure for the artists and the big production team! Never before in the history of television has something like this been undertaken including the very first “Ring” for television at Bayreuth.

Dmitri Shostakovich is arguably one of the greatest composers of the 20th century. To understand his music one needs to see it in the context of his life, his social environment, the political situation, the unbelievable brutality with which the Communist Party enforced its ideological credo and the subtle ways with which Shostakovich succeeded in combining his innermost thoughts with the demands of Socialist Realism. He was a man of many faces. And beyond any doubt Dmitri Shostakovich was a musical genius.

The Shostakovich Cycle includes introductions for each symphony and concerto by Valery Gergiev.

Orchestra and Chorus of the Mariinsky Theatre, Valery Gergiev

Most successful are young violinist Alena Baeva, who gives a sensitive and appropriately fiery performance of Violin Concerto…all the symphonies are given excellent, sometimes outstanding performances, with superb soloists…in Nos 13 and 14