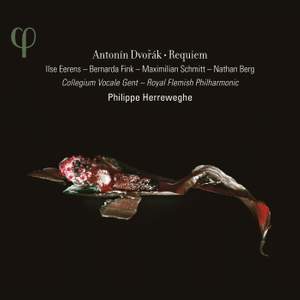 Herreweghe takes his task seriously. The first two movements of the Requiem are for the most part superbly delicate and beautifully shaped. The choral sound is always lovely, even if at times... — BBC Music Magazine, August 2015, 3 out of 5 stars More…

The Collegium Vocale Gent, the Royal Flemish Philharmonic and Philippe Herreweghe join forces once again for a monument of the sacred choral repertoire: Antonín Dvorák’s Requiem, Op. 89. This work, dating from 1890, is one of those that marked a new phase

in the composer’s musical creation, in which he recognized himself ‘as much a poet as well as a musician’. In addition, this reveals the veritable nature of a composer without constraint, probably being neither a commission nor an occasional work. Philippe Herreweghe offers us an interpretation as dense and concentrated as the writing of this masterpiece requires.

Herreweghe takes his task seriously. The first two movements of the Requiem are for the most part superbly delicate and beautifully shaped. The choral sound is always lovely, even if at times it lacks sufficient weight.

Herreweghe evokes the full range of this multi-layered piece. His strings and harp really shimmer at the start of the Offertorium and he achieves a chilling intensity at the opening of the 'Tuba mirum' with the trumpets' and tam-tam's eerie premonitions of Mahler. In the 'Pie Jesu' the horns and woodwind glow warmly before the soprano, alto and tenor soloist take over.

Summoning up a vast array of emotions and dramatic effects, Philippe Herreweghe shapes a gripping performance of Dvorak’s Requiem. Perfectly balanced, the excellent choir, the homogeneous soloists and the orchestra deliver exactly the sonorities that summon up the musical and spiritual worlds the composer had in mind.