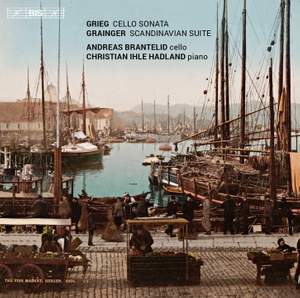 Brantelid's feverish energy, tonal and textural range add something new. The Andante has a glistening innocence, while the sense of rough, spontaneous dance in the finale pulls the music closer... — BBC Music Magazine, Awards Issue 2015, 5 out of 5 stars More…

After a meeting in 1906 in London, Grainger visited Grieg in Bergen the following year, only two months before the older composer passed away. The Danish-Swedish cellist Andreas Brantelid and his Norwegian chamber music partner Christian Ihle Hadland now turn to a programme of cello works by the two composers, opening with Grieg’s celebrated Cello Sonata. They also include less well-known pieces, however, such as the composer’s arrangement of the Allegretto from his third violin sonata, and an Andante con moto intended as part of a never completed piano trio, in which they are joined by the violinist Lars Bjørnkjær. Discovered after Grieg’s death, the piece would have to wait more than 70 years before receiving its first performance.

Brantelid's feverish energy, tonal and textural range add something new. The Andante has a glistening innocence, while the sense of rough, spontaneous dance in the finale pulls the music closer to its roots. That feisty quality ignites the Scandinavian Suite of [Grainger]...Nielsen's poignant Op. 21 song 'Just bow your head, oh flower' is an inspired encore. Blink and you could be sitting in a sunny wooden parlour in Funen, Denmark.

Brantelid is certainly virtuoso - try the cadenza-like passages and, indeed, the Allegro finale of the Sonata in general. He also finds a lovely colour for his instrument as it imitates the Halling-style fiddle leading the dance. But he never swamps the essential melodic simplicity of the music with misleadingly compensatory colour. Hugely recommened.