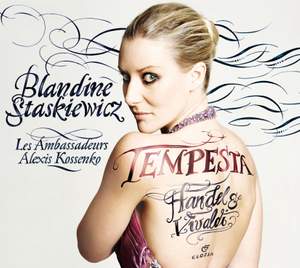 I do not always sense tangible engagement with dramatic characterisations, but the nuanced vibrancy from Staskiewicz and Les Ambassadeurs in the tempestuous 'Siam navi all'onde algenti' from... — Gramophone Magazine, July 2015 More…

With 'Tempesta', her first recital disc, mezzo-soprano Blandine Staskiewicz has chosen to venture into the emotional storms and calms beloved of Baroque composers – notably Vivaldi and Handel – which provided their operatic arias with that intense charge that captivates listeners still. As befits one raised on the tranquil, yet at times tempestuous, Belle-Île-en-Mer, lying off the Brittany coast, Staskiewicz is able to portray a fabulous array of moods to match her vocal beauty.

If the Neapolitans Nicola Porpora and Giovanni Battista Pergolesi are each represented on this disc by a single burst of concentrated dramatic feeling, it is to the fiery and tempestuous music of Vivaldi and the more psychological and interiorised offerings of Handel that Blandine Staskiewicz directs her attention in these arie di tempesta. Staskiewicz’s control of the depths and heights of the soul are matched by the instrumental accompaniment from Les Ambassadeurs and its director Alexis Kossenko.

Blandine Staskiewicz, who has appeared on previous Glossa albums in Lully, Campra and Handel in the company of Hervé Niquet and Fabio Bonizzoni, herself contributes an intriguing note about the genesis of this programme – complete with an alluring cover design – but it is her wonderfully controlled singing (and expertise in Baroque repertoire) which characterises 'Tempesta' so beguilingly.

I do not always sense tangible engagement with dramatic characterisations, but the nuanced vibrancy from Staskiewicz and Les Ambassadeurs in the tempestuous 'Siam navi all'onde algenti' from Vivaldi's L'Olimpiade is irresistible.

There have been many very fine recent releases of Handel and Vivaldi recitals, but few of them have featured a mezzo, let alone one of this quality … Staskiewicz’s powerful voice is as striking as her picture on the CD cover.