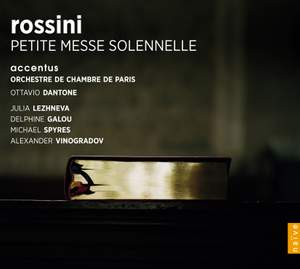 Starring Julia Lezhneva, Ottavio Dantone and accentus, this live recording brings a new and fresh light on Rossini's most famous choral work. The concert took place in Paris - Basilique de Saint-Denis, to celebrate the 150th anniversary of the work, first performed in March 1864, in Paris. The amazing quality of the solo voices (Julia Lezhneva, Delphine Galou, Michael Spyres, Alexander Vinogradov) meets the dynamic direction of Ottavio Dantone and is supported by the vocal dexterity of accentus chamber choir.

“Because of its uncommon instrumental forces, the ‘chamber’ version of the 'Petite Messe', for two pianos and harmonium, was long regarded as the definitive version; the orchestration Rossini made in 1867-68 was viewed as merely an arrangement. In his recent critical edition, Davide Daolmi presents a different interpretation, which makes the orchestrated version the culmination of a long genetic process, begun in 1862, in which the ‘chamber’ version is merely an intermediate stage. The posthumous premiere of the definitive version of the 'Petite Messe', which was also the work’s first public performance, took place at the Théâtre-Italien on 28 February 1869, the anniversary of the composer’s birth, with Gabrielle Kraus (soprano), Marietta Alboni (contralto), Ernest Nicolas (tenor), and Luigi Agnesi. It was at once a triumph and a highly emotional occasion. A few years later, on 30 May 1876, Verdi was to conduct his 'Messa da requiem' in the same theatre, thus continuing the homage to the great Italian composer.” from the booklet notes

What distinguishes this latest recording is the fineness of the choral contribution. The 34-voice Accentus choir might almost be singing the original, so elegant is their (discreetly recorded) contribution. They are helped in this by the deftness with which the orchestrations are realised by Ottavio Dantone and his Paris chamber players.

Is there a more attractive or haunting opening Kyrie to be heard in all of music? The chugging string motif immediately grabs the attention and the excellent choral contribution of Accentus is heard straightaway to compelling effect … This was an ear-opener for me. The orchestral version has taken one of my favourite works onto a new level. This is a magnificent performance that deserves to be commercially successful.

Ottavio Dantone has long been a champion of the work...You sense the shafts of sorrow behind the orchestral grace and choral refinement. Julia Lezhneva is the super-cool soprano, though the best singing comes from mezzo Delphine Galou, admirably noble yet restrained, above all in the deeply felt Agnus Dei.

[Dantone] rings an airy bounce to that fugue allied to the sort of mounting excitement that could have graced any of Rossini’s operatic finales. Four excellent soloists...considerably add to the dramatic impact.