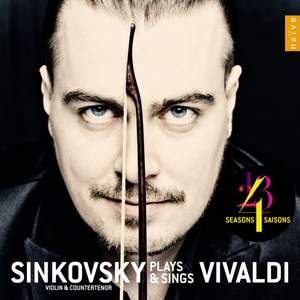 This new interpretation of Vivaldi's 'Four Seasons' is a long-awaited major event for Naive. Beyond the technical and musical options chosen by Sinkovsky, his decision to integrate and sing the vocal pieces in this recording, the cantata 'Cessate omai Cessate' and the aria 'Gelido in ogni vena' from Farnace, give a unique twist to the whole concept. Russian baroque violinist and countertenor Dmitry Sinkovsky has had a huge profile in Europe and Australia over the past few years. He was the privileged partner of Joyce di Donato during her Drama Queen worldwide tour, of which he was konzertmeister and his outstanding virtuosity and charisma have systematically enthused and impressed audiences wherever he performs. Sinkovsky's two previous contributions to the Vivaldi Edition (Concertos 'per Pisendel' and Double Concertos with Riccardo Minasi), both recorded with Il Pomo d'Oro, were enthusiastically received by the press: Diapason, Gramophone, Fonoforum, Scherzo e.a. Dmitry Sinkovsky founded La Voce Strumentale in 2011, bringing together musicians from Europe and Russia to form a period instrument orchestra specialising in 17th and 18th century repertory. They are a regular guest at leading concert halls in Moscow, including the Bolshoi Theatre and the State Philharmonic, and they have recently begun appearing in Europe where they have performed in Holland, Spain and Finland. In 2014 La Voce Strumentale began their collaboration with the French label Naïve, releasing their first CD with music by Vivaldi.

[Dmitry Sinkovsky] is a wonderful player.

Sinkovsky sprinkles Vivaldi’s seasonal varieties with a vocal concerto and an opera aria from Farnace: pretty vehicles for a chameleon-like voice well worth the listener’s ear. Yet the biggest quirks are in the Seasons themselves, despatched with curiosities of tempo, tone colours and improvised flourishes that may make your jaw drop.