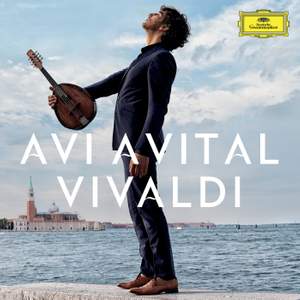 Avi Avital re-imagines the sounds of Venice in this vivid homage to the most beloved composer of the Italian Baroque, Antonio Vivaldi. After his introduction with BACH and the colorful, contrasting exploration of world music on BETWEEN WORLDS, on this album Avi presents four popular Vivaldi concerti with the great Venice Baroque Orchestra: Vivaldi’s Mandolin Concerto, the Lute Concerto (with its famous second movement), “Summer” from the Four Seasons, and the A minor Violin Concerto (familiar to violin students everywhere).

Interspersed with these familiar concerti are two authentic, 18th Century Venetian Gondolier songs, performed by Juan Diego Flórez, accompanied by Avi on mandolin; as well as the Trio Sonata in C major with DG’s new signing Mahan Esfahani and Ophira Zakai. The album was recorded in the Veneto region, the album is both musically authentic and commercially accessible.

Avital's fluent technique helps - holding notes for absolutely their full length, and with smooth shifts between hand-positions...Esfahani, guest continuo player, is strikingly inventive as he plays through held written chords at cadences. A gondola song with tenor Juan Diego Flórez provides a delightfully contrasting ending to the programme.

Avital brings spark, dexterity and his signature finesse to [the] transcriptions...While the plethora of discs of Vivaldi’s music might make us wonder at times if we have already heard enough, Avital breathes captivating new life and interpretative imagination into it.