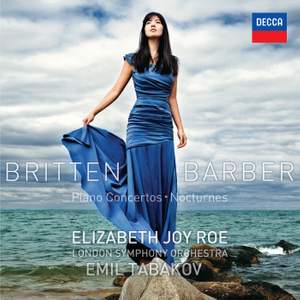 Roe brings an incisive and well-articulated touch to the ebullient first movement of the Britten..Barber's complex and declamatory opening Allegro appassionato is satisfactorily dealt with, the... — BBC Music Magazine, August 2015, 3 out of 5 stars More…

This solo release, a unique coupling of two of the 20th Century’s greatest piano concertos marks Decca’s first-ever recording of the Barber concerto and the first of the Britten since the classic Richter account conducted by the composer in 1970.

Elizabeth Joy Roe has been performing both works since a student at Julliard and has written extensive booklet notes which detail the intriguing parallels between the two composers. Her New York concerto debut was in the Britten conducted by James Conlon at Alice Tully Hall, Lincoln Center and in 2003 she was invited to replace the Barber concerto’s dedicatee, John Browning, at a performance with the Delaware Symphony shortly after Browning’s death.

The album is completed with two solo piano nocturnes by each composer: Britten’s ‘Night Piece’ and Barber’s ‘Nocturne - Homage to John Field’, widely-considered the father of the nocturne.

Roe brings an incisive and well-articulated touch to the ebullient first movement of the Britten..Barber's complex and declamatory opening Allegro appassionato is satisfactorily dealt with, the 'Canzone' has watercolour charm, and the ostinato underlying the final has a driving energy.

Elizabeth Joy Roe sets off into the Britten at quite a lick, getting the notes to sparkle. Her playing favours a consistently light touch and precision, while Emil Tabakov's conducting is founded on strong colours, abetted by some characterful playing from the LSO wind and brass…Roe's pinpoint playing [in the Barber] allows the elegaic slow movement to speak with a cool-headed intimacy…[the] well-chosen encores [are] almost mirror images of each other.

Her playing of Britten’s powerful 1938 concerto has an allure that is anything but sexy; it’s urgent and occasionally darkly sinister, a perfect reflection of the nervous year in which it was written. And Roe is more than a match for the demands of Samuel Barber’s exuberantly difficult 1962 concerto.