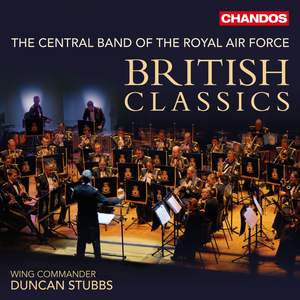 With such brilliant performances recorded vividly, there is no risk of the sequence outstaying its welcome. Pure delight for anyone in love with English folk music — Gramophone Magazine, June 2015 More…

This new recording with The Central Band of the Royal Air Force, conducted by Wing Commander Duncan Stubbs, features some of the greatest British pieces in the repertoire. The first military band to broadcast on BBC Radio, and the most frequently featured on the airwaves nowadays, it is at the forefront of military band and contemporary wind ensemble recording. Wing Commander Duncan Stubbs, the Band’s conductor, comments: ‘In the late 1980s I was a bassoonist in The Central Band, performing on a previous recording of music by Holst, Vaughan Williams, and Grainger. To be the Principal Director of Music and conductor on this new recording marks the culmination of an ambition and a significant high point in my Royal Air Force career. The music represents some of the most iconic wind band repertoire, Holst’s Suites in particular having close links to our military heritage. Including Langford’s Rhapsody also continues our record of ‘firsts’ achieved by a British military band, similar events having been the first radio broadcast and the first LP recording. I am hopeful that this disc will continue the proud tradition of musical excellence that is synonymous with The Central Band of the Royal Air Force, the band that it is my immense privilege to conduct.’

With such brilliant performances recorded vividly, there is no risk of the sequence outstaying its welcome. Pure delight for anyone in love with English folk music

Holst’s two suites are marvels of concision and inventiveness, and work well alongside Vaughan Williams and Grainger in nostalgic vein