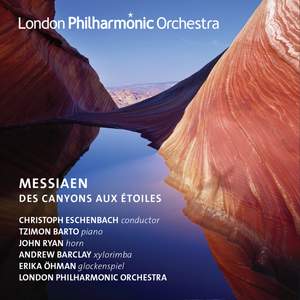 Christoph Eschenbach animates the score with a true feel for the Messiaen language, embracing the epic as well as the meditative…it is a performance that serves as a reminder that Messiaen described... — Gramophone Magazine, May 2015 More…

Commissioned to celebrate the bicentenary of the United States Declaration of Independence, Messiaen’s Des canyons aux étoiles was inspired by the composer’s tours around Utah’s magnificent landscapes, including Bryce Canyon and Cedar Breaks, which so affected him with their beauty. This is no musical tourism however: the work takes the listener upwards, from the depths of the canyons, to the songs of birds, to outer space, and ultimately to the Celestial City.

The work’s unusual instrumentation includes solo piano and horn, 13 string instruments, quadruple woodwind, triple brass, tuned and unturned percussion including éoliphone (wind machine) and géophone (sand machine). This creates a texture that evokes the majesty and loneliness of the landscape, as well as its inhabitant birds with astonishing effect.

This recording presents a rare opportunity to hear Messiaen’s Des canyons aux étoiles which is not available extensively on record and is infrequently performed live.

This performance was recorded live in concert at Royal Festival Hall on 2 November 2013, as part of Southbank Centre’s The Rest Is Noise year-long festival of 20th-century music, inspired by Alex Ross’s bestselling book of the same name. The performance received a good critical reception, with the Evening Standard commenting that ‘it’s the teeming richness of the whole that overwhelms, and Eschenbach and his players had the measure of the music’s vast perspectives.’

Christoph Eschenbach is a champion of 20th and 21st-century compositions, and has gained a reputation as a key interpreter of more unusual and challenging works, including having recorded works by Dalbavie, Saariaho and Berio. He played piano in a recording of Messiaen’s Quatuor pour la fin du temps which was reissued on Membran in September 2014. Eschenbach enjoys a strong relationship with the LPO label, having released both Bruckner’s Symphony No. 6 and Beethoven’s Missa Solemnis to critical acclaim.

Pianist Tzimon Barto is one of America’s foremost pianists, and has enjoyed a close musical collaboration with Christoph Eschenbach for 25 years. His performance of Des canyons aux étoiles with the LPO was particularly noted by reviewers as showing ‘tremendous dexterity in combining force and power ... contrasted with delicacy and sensitivity’ (Classical Source).

Christoph Eschenbach animates the score with a true feel for the Messiaen language, embracing the epic as well as the meditative…it is a performance that serves as a reminder that Messiaen described this elemental score as 'a work of praise and contemplation'.

This performance of Messiaen’s late, great 100-minute orchestral cycle — 12 pieces for an altering configuration — was recorded live at the Royal Festival Hall in 2013, and makes a powerful, colourful, even apocalyptically witty effect, I find, on speakers.