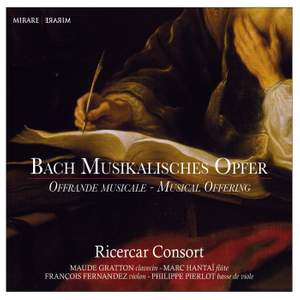 (Canon) 3 a 2 per Motum contrarium

(Canon) 4 a 2 per Augmentationem, contrario Motu

Sooner or later the Ricercar Consort had to confront the spirit of the ricercar, explicitly advocated by Bach in his 'Musical Offering': a collection of canons, fugues and other works based on a single musical theme given to him by Frederick the Great of Prussia.

In the order chosen by the Ricercar Consort, the Trio Sonata for flute, violin, and continuo takes up a central position, separating the three-part ricercar, from its six-part counterpart, a dense, fluid work, extremely challenging for the performers. Thanks to the ordering adopted in this new recording, this 'Ricercare à 6' appears in its full grandeur, illuminated by the mosaic of the canons.

the harpsichord playing of Maude Gratton is one of the highlights of the disc. On a fine-sounding but uncredited instrument, she allows enough air into the six-part Ricercar to prevent its texture from becoming senselessly thick, and is sprightly and clear in the freer-spirited three-part Ricercar. Nor is there a shortage of wisdom elsewhere. As ever with this group everything is very particular and refined