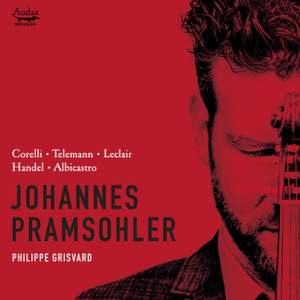 After his recording debut with violin concertos from Dresden Johannes Pramsohler releases his second CD and takes on a new challenge: launching his own label, Audax Records, where he aims to give forgotten and neglected masterworks a befitting place.

With a thoroughly researched musicological programme of violin sonatas by Corelli, Telemann, Leclair, Handel and Albicastro, Pramsohler commemorates Arcangelo Corelli's death and pays hommage to one of the key figures in music history. Corelli published his violin sonatas op. 5 on January 1st, 1700 which became a groundbreaking work that rapidly spread all over Europe influencing many composers, amongst them the four composers featured on this disc.

Johannes Pramsohler and Philippe Grisvard (harpsichord) play with virtuosity and captivating sonority on their journey through the baroque era of europe.

Johannes Pramsohler was born in South Tyrol, studied in London and is now based in Paris. He has established himself internationally as an emminent expert of historical informed performance. He is regularly invited to lead and direct orchestras like Concerto Köln, Le Concert d'Astrée, The King's Consort, the Taiwan Baroque Orchestra and the European Union Baroque Orchestra. On this CD he plays his P.G. Rogeri previously owned by Reinhard Goebel.