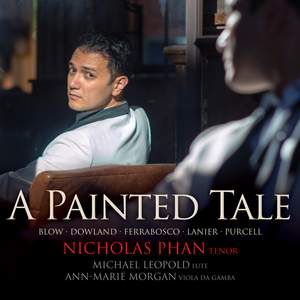 here's a disc disc to remember come all those end-of-year round-ups... There's a directness to Phan's delivery, a clarity to his diction that has previously found its home in Britten's text-driven... — Gramophone Magazine, April 2015 More…

Johnson, R: Have You Seen But a Bright Lily Grow

Blow: The self-banish'd (A Minuet) - song with theorbo

Blow: O turn not those fine eyes away song with harpsichord

Lanier: No more shall meads be deck’d with flowers

Blow: Of all the torments, all the cares

Alfonso Ferrabosco: So, So, Leave Off This Last Lamenting Kiss

Lanier: Stay, Silly Heart, and Do Not Break

On ‘A Painted Tale’, his third solo album for AVIE, tenor Nicholas Phan turns to songs of the English Renaissance and Baroque by Blow, Dowland, Ferrabosco, Lanier and Purcell, in a program which tells a story of love gained and then lost.

The composers presented on ‘A Painted Tale’ were greatly influenced Benjamin Britten, the muse of his two previous recordings - ‘Still falls the Rain’ (AV2258) and ‘Winter Words’ (AV2238), his solo debut recording which topped the Best Classical Recordings lists of NPR, The New Yorker, and The New York Times. ‘A Painted Tale’ - the title taken from a lyric by 16th century composer Thomas Morley - features songs with lute and viola da gamba by Blow, Dowland, Ferrabosco, Lanier and Purcell. Describing the programme, which tells a story of love gained and then lost, Nick says, “Reading the poetry in these songs I am fascinated by how little the human experience has changed over the centuries. By assembling these various songs into what I call ‘a pastiche song cycle,’ I hope that creating a dramatic context for these pieces will highlight how relevant this material still is today.”

here's a disc disc to remember come all those end-of-year round-ups... There's a directness to Phan's delivery, a clarity to his diction that has previously found its home in Britten's text-driven settings...Simple pleasures - musical interplay among sympathetic colleagues, text and music each revealing the other, a voice doing what it does best - are celebrated, amplified here.