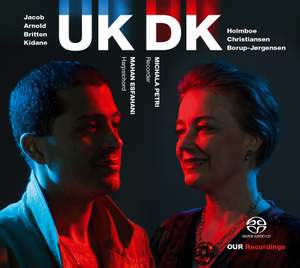 Throughout the programme, well recorded in a Copenhagen church, Petri plays with immaculate tuning and finger technique, crisp tonguing and well-shaed melodic lines; Esfahani matches her with... — BBC Music Magazine, Awards Issue 2015, 5 out of 5 stars More…

No. 1. Arrival at Zermatt

No. 5. Moto Perpetuo: Down the Piste

No. 6. Farewell to Zermatt

Jacob, G: An Encore for Michala

During the height of the Greek economic crisis, the 13th International Pharos Chamber Music Festival on the island of Cyprus was in jeopardy of being cancelled due to the sudden loss of funding. Were it not for the passion and commitment of those artists who waived their performance fees, the festival would only have been remembered as another casualty of the austerity programs across Europe.

But for two of the artists, adversity fuelled a performance so compelling, that English Music critic Norman Lebrecht would describe their recital as a “A match made in heaven”.

The artists from that now legendary concert were rising star of the harpsichord Mahan Esfahani and reigning queen of the recorder, Michala Petri. So successful was their collaboration that they immediately set about planning future recordings and recitals.

The idea for this album and its unusual programme immediately suggested itself: “Michala is a Dane and Mahan lives in UK!" explains producer Lars Hannibal. And what better way to showcase their talents than with music from their respective homelands?

Focusing exclusively on 20th century repertoire – much of it composed especially for Michala, including a newly commissioned work from Daniel Kidane as well as CD premieres of works by Vagn Holmboe and Henning Christiansen – the duo offer a wide-ranging recital that fully exploits the expressive possibilities these two typically 'Baroque' instruments offer contemporary composers.

Throughout the programme, well recorded in a Copenhagen church, Petri plays with immaculate tuning and finger technique, crisp tonguing and well-shaed melodic lines; Esfahani matches her with well-judged colours and phrasing.

The warm heart of this programme is the Sonata (1980) by Holmboe…like all late Holmboe, light and peace are the pervading features of the three movements. A wonderful advert for this instrumental pairing and for virtuosity in general.

Petri is as appealing as ever and Esfahani convinces utterly