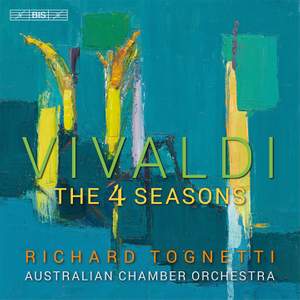 Everything's done with great care, buoyancy and tastefulness, but that very tastefulness can be over-respectful...Better is the joyously incisive account of the four-violin concerto Bach reworked... — BBC Music Magazine, Awards Issue 2015, 4 out of 5 stars More…

In celebration of the ACO's 40th birthday in 2015 BIS announce the release of a new recording of Vivaldi's iconic Four Seasons, conducted by Artistic Director Richard Tognetti.

In 1725 Il cimento dell’armonia e dell’inventione (‘The Contest of Harmony and Invention’) would secure Antonio Vivaldi’s reputation for eternity. The first four concertos of this collection form what has become one of the most widely spread classical compositions in the history of music: Le Quattro Stagioni. Now Richard Tognetti and the Australian Chamber Orchestra, a team internationally recognized for its virtuosity, energy and individuality, has recorded their take on Vivaldi’s springtime birdsong, summer thunderstorm, autumn hunting and chattering teeth of icy winter. The programme also includes two typically Vivaldian slow movements, a Largo and a Grave, as well as a Sinfonia for strings originally intended as the overture of the opera La verità in cimento (‘Truth in contention’).

Everything's done with great care, buoyancy and tastefulness, but that very tastefulness can be over-respectful...Better is the joyously incisive account of the four-violin concerto Bach reworked as a dazzling showcase for four harpsichords, while best of all is the first movement of the Sinfonia to La verita in cimento which crackles with the elemental force of a forest fire.

although this isn't a live recording, what you do get is all the excitement and spontaneity of a live performance - along with the ACO's trademark visceral approach to early music…there is some exceptional playing here.

It is sufficiently respectful of Baroque sensibilities as to appeal to those who might shy away from too much animal scene-setting and yet has enough meteorological definition to convey the fact that Vivaldi was not just writing four concertos but was trying to capture images of spring, summer, autumn and winter within them.