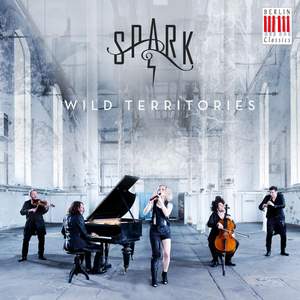 Ince: Songs with Other Words

Meijering, Ch: When the Cock Crowed His Warning

Meijering, Ch: Silver Falls is in the Heart of the Forest

SPARK, the classical band, comes forward on its Berlin Classics debut album Wild Territories with a bold release on which the ECHO-winning group pursues the logical development of its wholly personal sound in the space between post-classical, minimal music and avant-garde. Virtuosic and unfettered, the five young musicians move between the poles of contrasting musical worlds and eras and forge tradition and innovation into a thrilling new sonic experience attuned to the zeitgeist. The album title tells a story. These are five young artists determined to chart virgin musical territory, confound convention and give free rein to their imagination. Together they conjure up a luxuriant rainforest that spreads its fronds from baroque times to the present day. They run the gamut from Telemann alla polacca to Beyoncé on recorder. It's wilful and amazing, it's catchy on the ear and it goes right to the heart. Each of the chosen pieces is wild and uninhibited, be it in gesture, in timbre or in its rhythmic complexity. This is SPARK's way of proving that musical wildness is a timeless phenomenon that finds expression on all levels throughout human history. There is a definite emphasis on the modern. Kenji Bunch, Chiel Meijering, Kamran Ince and Johannes Motschmann have tailored exciting new sounds to the profile of this classical band. The American Kenji Bunch devotes himself in his three-part work Alphadog to daring harmonic, rhythmical and motivic layering.