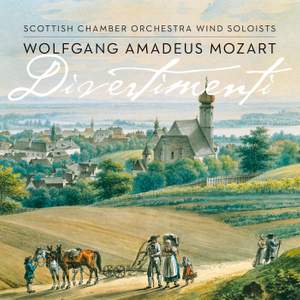 by skilfully modulating their tone between the smooth and the raucous, the two clarinettists here contrive to minimise the absence of oboe timbre in what proves a lively and nicely nuanced reading...these... — BBC Music Magazine, Awards Issue 2015, 4 out of 5 stars More…

Mozart: Divertimento in B-Flat Major, K. 270 in B Flat Major

Mozart: Divertimento in B-Flat Major, K. 240 in B Flat Major

Following the success of performances and recordings of Weber’s Wind Concertos with SCO principals as soloists, the SCO Wind Soloists that feature on this album have since 2012 started to explore Harmoniemusik repertoire.

Inspired by the legacy of the great Mozartian conductors of the SCO including Sir Charles Mackerras, the Wind Soloists make a fine contribution to the SCO’s distinguished Mozart discography.

This new recording includes four of the five Tafelmusik sextets for pairs of clarinets, horns and bassoons, together with the Serenade in E flat major, the first of Mozart’s three great wind serenades.

The Serenade in E flat major has many unusual features. Its opening fanfare - a series of repeated chords on the tonic in E flat - immediately catches the ear.

The fact that Mozart avoids fatiguing the listener with a surfeit of the same sonorities, in music with a necessarily limited dynamic and instrumental range, bears eloquent testimony to his genius.

This recording captures the wealth of detail in Mozart’s Divertimenti; there is something in each of them for every music lover.

Comprising pairs of clarinet, bassoons and natural horns, the players are dedicated to performing each work in a stylish and informed way, from the masterpieces of Mozart, Beethoven and Weber to twentieth-century works and contemporary commissions.

The SCO Wind Soloists have appeared in chamber concerts throughout Scotland. They have also performed at the Palace of Holyroodhouse in the presence of HRH The Prince Charles.

by skilfully modulating their tone between the smooth and the raucous, the two clarinettists here contrive to minimise the absence of oboe timbre in what proves a lively and nicely nuanced reading...these are exuberant performances, recorded with real presence.

Like all the best ensembles in this music, they strike a nice balance between chamber-musical refinement and rustic earthiness...The rare example of Mozart polonaise in K252 goes with a jaunty swagger...while the lusty contredanse finales exude an impish glee. I fancy Mozart would have smiled in approval.

Martín's clarinet...is particularly winning, charming in the slow movements, full of sparkle and wit in the faster ones…the whole air of the disc is exceptionally genial and I enjoyed it immensely.

These performances pick up on every morsel of wit and ingenuity in the wind writing, and never forget that the purpose of this music was to entertain.