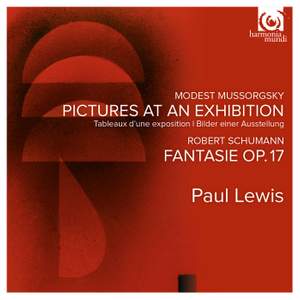 Offer, Mussorgsky: Pictures at an Exhibition

Lewis has a natural empathy for Schumann, revelling in the first movement's impulsive changes of mood and projecting wonderfully calm inner reflection at the outset of the third. He emphasises... — BBC Music Magazine, April 2015, 5 out of 5 stars More…

Promenade. I. The gnome

Promenade. VII. The marketplace in Limoges

With the dead in a dead language (Promenade). IX.The hut on fowl's legs (Baba Yaga)

X. The great gate of Kiev

Interview,  A trip to the gallery with Paul Lewis.

Katherine talks to the British pianist about his new recording of Mussorgsky and Schumann, out this week on Harmonia Mundi.

In 1870, the architect, sculptor and painter Viktor Hartmann (born in 1834) was invited by Vladimir Stasov, the most influential Russian art critic of his time, to join the ‘Group of Five’, a St Petersburg-based circle of composers that, in addition to Mussorgsky, included Borodin, Balakirev, Cui, and Rimsky-Korsakov. The members of this ‘Mighty Handful’ had set themselves the spiritual task of establishing a national Russian music free of western influences. Just three years later, in August 1873, Hartmann died of an aneurysm; he was not yet 40. ‘What misfortune! O greatly suffering Russian art!’ wrote the deeply affected Mussorgsky, lamenting the loss of his friend. Along with Stasov, he championed the cause of a memorial exhibition in honour of his intellectual fellow-spirit. Stimulated by this much-admired retrospective, in the spring of 1874, which presented some 400 pictures from different phases of the artist’s creative career, Mussorgsky decided to erect a musical monument to the dead man as well. He threw himself feverishly into the work. When the piano cycle was completed on 22 June 1874, the manuscript bore the inscription: ‘Dedicated to Vladimir Vasilievich Stasov. Pictures at an Exhibition. In Memory of Viktor Hartmann.’ Mussorgsky created here something subtler and more ambivalent than Hartmann’s paintings might suggest. Alongside the dazzling virtuosity they call for, Paul Lewis’s unexpected coupling reveals the purely musical qualities of these two 19th-century masterpieces.

Lewis has a natural empathy for Schumann, revelling in the first movement's impulsive changes of mood and projecting wonderfully calm inner reflection at the outset of the third. He emphasises the cogency of Mussorgsky's Pictures with a performance of granitic strength and wonderful tonal variety.

Lewis has quite a spring in his step, and he emphasises the sense of leading to each Picture by not tracking the Promenades separately...The Schumann (perhaps a strange coupling) has much to recommend it. It is more contained than some; but Lewis's haloed sound and unfailing sense of thoughtfulness is winning.

Lewis parades [the Schumann's] heroic gestures in bold style, but he is also dynamically modulated - the music and what it may be about comes first...and his manner in slower sections is seductive if also organically fitting...As for the canvases, Lewis is vivid with them, and his approach is enjoyable and admirable...Lewis's account, overall, is very impressive and recommendable.

Lewis possesses the palette of pianistic colour and the immediacy of impulse to animate and crystallise the moods of the individual miniatures, coupled with the long view that unites them into a multifaceted but fully integrated whole. The magnificence of his achievement here is replicated in Schumann’s C major Fantasie.

I liked his fearless approach – it is like a young gazelle outrunning its competitors … Lewis brings his beautiful singing tone to the tender last movement [of the Schumann].

His directness of approach is heightened by the in-your-face closeness of the recorded sound…the resulting rawness highlights the originality of the music.