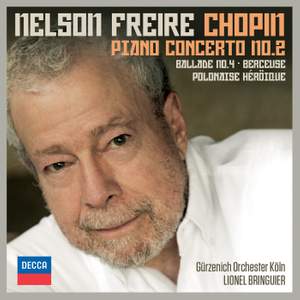 Freire's sheer love of music, and of this music, is positively incandescent...This is playing of exceptional virility, entirely untainted by machismo posturing or narcissistic display. Chopin... — BBC Music Magazine, March 2015, 5 out of 5 stars More…

No.2 in A Flat Major

In the third of three new landmark albums on the Decca label, Nelson Freire marks his 70th birthday year with a stunning recording of Chopin’s lyrical and brilliant Piano Concerto No. 2

The recording was made in Cologne with the Gürzenich-Orchester Köln and Lionel Bringuier, one of the most talked-about of the younger generation of conductors and features some favourite Chopin solo works – the Ballade No. 4 in F minor, Op. 52, the Berceuse in D flat major, Op. 57, the Polonaise in A flat major, Op. 53, Three Mazurkas, Op. 50, plus the Impromptu in G flat major Op. 51

This is Freire’s fourth Chopin recording for Decca, which includes his celebrated set of the complete Nocturnes, of which the Guardian wrote: “[Freire] respects the poise and elegance of the melodic lines, floating them exquisitely while teasing out the harmonies beneath with fastidious care; this is Chopin playing of high quality, from one of the finest pianists alive today.”

Freire's sheer love of music, and of this music, is positively incandescent...This is playing of exceptional virility, entirely untainted by machismo posturing or narcissistic display. Chopin stands fully revealed as a giant.

The recording is at its best wherever Nelson Freire is ravishing the ear with showers of notes that glisten with precision.

those who warm to his proverbial fluency will take a particular shine to his gracefully inflected way with the Third Impromptu's elegant serpentine tracery. Elsewhere, in the Fourth Ballade, even the most tension-filled pages emerge as civilised discourse and will delight those who like their Chopin plain and simple.

a Chopin collection that culminates in a beautifully controlled account of the limpid second piano concerto, with the Gürzenich players bringing grace and intelligence to the notoriously staid orchestral writing. As substantial hors d’oeuvres, Freire gives us a plateful of Chopin favourites.