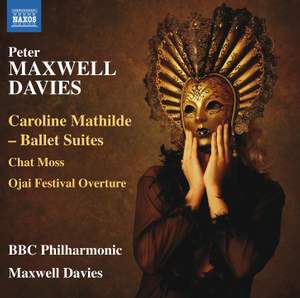 I. A Public Square

II. Inside the Castle

I. A Public Square

VII. The Exile of Caroline Mathilde

Sir Peter Maxwell Davies’ ballet Caroline Mathilde premièred in 1991 and has been highly acclaimed ever since. Its story concerns the tragic marriage of Caroline to Christian VII of Denmark and is cast in a musical language that embraces expressionism, drama, parody, and overt lyricism. The two concert suites chart the young queen’s fall from grace and her eventual banishment into exile. Chat Moss is a richly textured tone poem, while by contrast the Ojai Festival Overture is a lively and extrovert concert piece reflecting Maxwell Davies’ fondness for American landscape and culture.

These are ex-Collins releases recorded in the 1990s, though originally differently coupled.

This disc, in fact, is the last of the Collins reissues. The concert suite from Caroline Mathilde was coupled with Beltane Fire, for instance, and the Ojai Festival Overture with the popular and riotous Mavis in Las Vegas and An Orkney Wedding with Sunrise on Collins 1524. The trio of pieces offer very different pleasures. The ballet Caroline Mathilde is a modern classic, presented in two concert suites, very lyrical and standing in the great tradition of ballet scores from the nineteenth-century onwards, spiced with Maxwell Davies’ personal vocabulary. Chat Moss is a tone poem and the Ojai Festival Overture is extrovert and colourful.