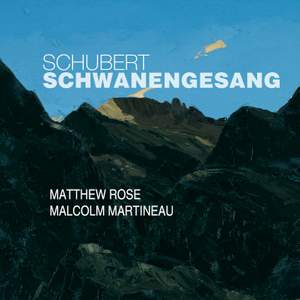 Rose's voice may be best suited to the more boisterous songs, such as 'Der Atlas', but he can also be delicate without sounding precious — BBC Music Magazine, June 2015, 4 out of 5 stars More…

Following on from his hugely successful recording of Winterreise for Stone Records (5060192780222), which won such accolades as Gramophone's 'Recording of the Month' and BBC Radio 3 CD Review's 'CD of the Week', Matthew Rose has teamed up with award-winning accompanist Malcolm Martineau to produce a definitive recording of Schubert's final cycle, Schwanengesang. Already a star of the world's most important opera houses (including the Met and Covent Garden), Rose produces a dramatic performance of enormous vitality as well as a beautiful, burnished, legato tone, to give a Lieder recital that is a joy to listen to.

As for Winterreise, the booklet is beautifully presented and comes with full texts and translations, as well as two articles, in English and German, by Susan Youens and Warwick Thompson. As an encore item, Rose and Martineau are joined by rising stars Christina Gansch and Robert Murray for a rare performance of Schubert's comic ensemble Der Hochzeitsbraten.

Rose's voice may be best suited to the more boisterous songs, such as 'Der Atlas', but he can also be delicate without sounding precious

Rose shows that a deep voice and low keys need not make for a gloomy experience in Schubert. It helps that his voice has the scope for lyrical beauty...and that offsets his rugged strength...With pianist Malcolm Martineau chameleon-like in matching his singer’s colours, there are more than enough contrasts.

He is now among the most musically illuminating of the new generation of basses, alert and perceptive in performance, as his Winterreise (for the same label) has already shown. Again here, with the pianist Malcolm Martineau, with whom Rose first sang the cycle in 2004, he ensures clear textures, sensitivity to the words and a lightness and variety of touch.

These impressive performers vary the tone convincingly without compromising intensity or focus. excellent sound and presentation.