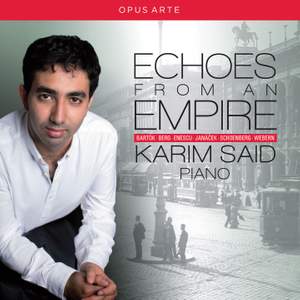 Echoes From An Empire: Karim Said

Said treats every work on its own merits, in its own language. The personality and significance of each composer is subtly etched with remarkable skill...A gripping recital, tellingly designed... — BBC Music Magazine, June 2015, 4 out of 5 stars More…

Praised for the 'self-effacing intensity and intelligence' of his playing, young Jordanian-born pianist Karim Said hailed by International Piano magazine as 'one to watch' here presents a compelling programme of early twentieth-century music selected to mark the First World War centenary and which reveals his captivating style. Six unique personal languages are explored in this debut album, as Said recounts a period of dramatic social and artistic change that gave rise to an early modernist style imbued with fragments of the Romantic past.

Said treats every work on its own merits, in its own language. The personality and significance of each composer is subtly etched with remarkable skill...A gripping recital, tellingly designed and very impressively played.

Berg's Piano Sonata, Op. 1 is given a full-blooded, lucid reading...The real discovery of the disc is Enescu's rarely heard Suite No. 2 in D...Worth the price of this classily produced and superbly executed disc alone.

Said is clearly a pianist to follow...Said shows himself to be a wonderfully full-blooded interpreter of this music, in which the vestiges of late romanticism constantly butt up against the early stirrings of modernism.