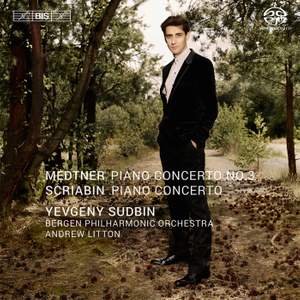 These are superb performances of two underestimated concertos...this is unquestionably an engaging account, Sudbin's glistening and expressive virtuosity matched by Andrew Litton and the Bergen... — BBC Music Magazine, February 2015, 5 out of 5 stars More…

Sudbin’s recordings of Medtner’s first and second piano concertos (BIS1588 and BIS1728) were widely admired, with the first disc nominated for a Gramophone Award and the second being dubbed an “Essential Recording” in BBC Music Magazine.

His recordings of Scriabin have similarly garnered universal acclaim. The liner notes, written by Sudbin, state with conviction that both concertos are “absolute masterworks – unjustly underperformed and constantly underappreciated”.

With great empathy for, and insights into each composer. Yevgeny Sudbin takes on the great challenges – musical as well as technical – posed by the two works, with the eminent support of the Bergen Philharmonic and their chief conductor Andrew Litton.

These are superb performances of two underestimated concertos...this is unquestionably an engaging account, Sudbin's glistening and expressive virtuosity matched by Andrew Litton and the Bergen Philharmonic's idiomatic playing...Even more revelatory is their performance of Medtner's Third...[Sudbin] seems alert to its every note and creates a compelling journey.

Sudbin has found in Andrew Litton a wonderful comrade-in-arms and the characterisation offered by his Bergen Philharmonic is one of the pleasures of this recording. The interplay between pianist and orchestra is unfailingly chamber-musical and reactive.

In the Scriabin Concerto, Sudbin displays formidable technical virtuosity, in a performance contrasting emotional intensity with melancholy and tranquillity...I cannot understand why this melodious concerto is not taken up by more pianists...On the evidence here, there is no doubt in my mind that Sudbin’s discographical legacy is going from strength to strength.

Sudbin is wonderfully dashing in the Scriabin, where the rapturous, refined playing of the Bergen Philharmonic under Andrew Litton also really comes into its own, especially in the finale, but he makes heavier weather of the much darker, almost gruff Medtner; the performance never really takes wing

In Litton and the Bergen orchestra, Sudbin has found like-minded partners who are willing to follow him in the music’s liquid flow, and the result is a performance that is an exultantly truthful tribute to Scriabin’s individuality.

Sudbin shows not only a great commitment and passion for two underrated works, but also finds his very personal and special approach. Together with the highly refined playing of the Bergen Philharmonic, Sudbin’s reading combines lucidity and profoundness, tension, a wide range of colours and, of course, technical perfection. His art provides a compellingly new view on these late romantic Russian piano concertos.