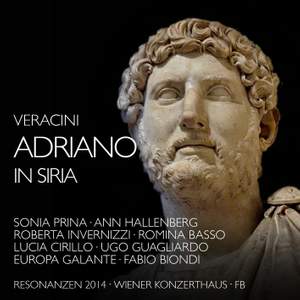 Veracini: Adriano in Siria, Act I

Francesco Maria Veracini (1690-1768) is today best known as an eccentric violin virtuoso and composer of instrumental music, but he has also successfully operated as an opera composer during his time in London. His first opera Adriano in Siria was created in 1735 for the London Opera of Nobility, the rival company to Handel's opera troupe.

The company had only a few years earlier (including the soprano castrato Senesino and Francesca Cuzzoni) poached all Farinelli. Veracini's Adriano in Siria is, in every respect, a spectacular and fascinating opera. The recording of Fabio Biondi and an appropriate illustrious singers ensemble is based on a highly successful concert performance series of the work at the Vienna Konzerthaus in 2013, which brought alive again the spectacular opera event of 1735.