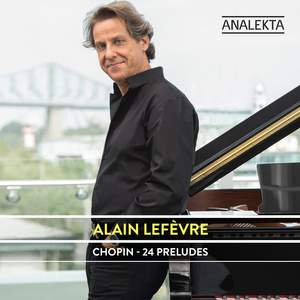 No. 5 in D Major. Allegro molto

No. 7 in A Major. Andantino

No. 8 in F-Sharp Minor. Molto Agitato

No. 10 in C-Sharp Minor. Allegro Molto

No. 17 in A-Flat Major. Allegretto

No. 24 in D Minor. Allegro Appassionato

Soler, A: Sonata No. 24 in D Minor: Andantino Cantabile

Pianist and composer Alain Lefèvre , acclaimed by the international press for his “phenomenal technique” (The Spectator ), his “sparkling playing” and “fascinating interpretations” ( Kölner Stadt Anzeiger ), his “absolute mastery” ( Hamburger Abendblatt ) and for his deep sensitivity, delivers, on the ALEKTA label, the entirety of Chopin 's (1810-1849) 24 preludes ( Opus 28 ), as well as a work by Padre Antonio Soler (1729-1783), the Sonata in D minor No. 24 – Andantino cantabile. Micro-Universes that unfold under the pianist’s fingertips and that become one with the intensity of his playing. Once again, virtuosity is at the service of a flawless musical interpretation.

Alain Lefèvre segues into Chopin's 24 preludes, each in its respective key, major or minor, in the style used by the composer's idol, Johann Sebastian Bach, in his Well-Tempered Clavier. Let's have the audacity to divide them into 4 different groups, according to the nature of their writing or mood similarities: the “luminous” (prelu des 1,3,5,7,10,11,19) that break out like a glistening waterfall or like a wave motion; the “tempestuous” (numbers 8,12,14,16,22,24) that twirl into the eye of a musi cal storm; the “romantics” (numbers 13,15,17,21,23) that immerse us in a world of passions, dreams and illusions. And then there are the “mysterious” (numbers 2,4,6,8, 9,15,18,20), or “feverish” or even “repellent”, in the words of Schumann... They are murky, melancholic, unexpected an d unusual, breaking the rules of harmony of that era. Going from one prelude to the next and from one frame to the other, poses quite a challenge for the artist. But thanks to the expressiveness of his playing and his exceptional virtuosity, Alain Lefèvre brilliantly rises up to this challenge. It is with the same focus and the same intensity that he embodies and pulls us into each micro-universe.

This new album will, without a doubt, delight Alain Lefèvre 's audiences the same way his complete body of works already has.